As a car shipping company, we depend on as much repeat business as we can get.  It helps offset any additional costs come up and if any one has ever owned a business, additional costs occur frequently.  I was nearly about the completely close up the car shipping brokerage and do the lead generation 100%. I was randomly answering phones for my business and Nick Holloman from Chelsea Motors was on the other end looking for a few cars to get transported. For some reason I didn’t send him to the lead generation business, I kept this one for myself. No specific reason, I was kind of giving every other lead to the lead generation business and keeping the others for myself. No specific reason though.

I explained to Nick Holloman who I was, what my business does and what I could do to help him.  At the end of the day that is what a broker in this industry should be doing to sell a customer.  I simply gave him my undivided attention, took care of business and in return have created a great business relationship with him and the company he manages.

Now, I don’t let foreigners who cannot speak English properly take my customers cars.  It is not worth the headache of dealing with the crappy trucker who cannot understand how to perform a service nor it is fair to the customers.  I ask questions to the truckers or dispatchers ahead of time to make sure everything is out in the open and there are no surprises and expectations are met for the customers.

Nick Holloman transports a fair amount of cars each month, some more than others obviously, but what he has done for me and my businesses is priceless.  He is just a good guy and someone that I respect and I want to thank him for everything he has done for me directly and indirectly.

CSC has always been on the front line cleaning up messes from other brokers in the biz.  By being honest, upfront and educating the customer Car Shipping Carriers has help many customers in desperate need to have their car transported.  This story involves an elderly couple who needed to get their car from Tampa, FL to Roanoke, VA.

The Frederick family, Sue and Harold, were in need of a service to transport their Chrysler Sebring convertible from Tampa to Roanoke.  Per the conversation the family had with Car Shipping Carriers, the family found a company online (we will not name the company) and the Frederick family said they seemed like an honest and trustworthy company so they just went with them.  They signed a contract and gave a $200 deposit to them via credit card so they could book the company to transport their car.  The vehicle was suppose to be picked up May 30th, 31st to June 1st.  May 30th came and went with no response.  May 31st came and went with no response.  On June 1st the Frederick family started to panic and called the company they initially choose to work with and they said they were still looking for a hauler for them.  The family was devastated because they needed to catch a flight back to Virginia the next day around noon.

The company went back online and did another search and found Car Shipping Carriers.  Harold was the one who called CSC and spoke with the owner, Nicholas Dutko.  He explained the situation he was in and Nick did a bit of educating on the business and explained what the problem was.  See, every company you find online for the auto transport industry is just a broker.  Each broker needs to post your vehicle on a national website where truck drivers and car movers look on to find cars to transport.  The website is called Central Dispatch.  Nearly every single broker and carrier uses this website.  Nick saw the Frederick’s vehicle posted online by the other company and knew what the issue was.  There were over 257 vehicles moving within a 100 mile radius around Tampa, FL and 100 miles radius around Roanoke, VA.  Most of the vehicles were posted for $700-$800 for the truck drivers to be paid and the broker the Frederick family was working with had it posted for $600.  The broker severely under quoted the customer and was not going to find a truck driver to take it for that price because there were literally hundreds of other cars that were priced higher.  It was simple math.

Once Nick explained why the car wasn’t moving and why it is not good to give a broker money upfront Harold knew he needed to work with Car Shipping Carriers.  Nick then posted the vehicle for $765 and found a carrier within 2 hours.  The carrier picked up the vehicle before dinner on June 1st, so the Frederick family was able to make their flight and not skip a beat.  The broker fee that was paid to Car Shipping Carrier was only $135, which is less than most companies in the industry.

Nearly every issue in the car shipping industry can be avoided in companies would just be upfront and honest with the customers.  It doesn’t seem too much to ask.  The more people know, the more they can understand and things will get accomplished much easier.  This is just one of many success stories Car Shipping Carriers has. We hope this helps other customers in the future so they are not put into a situation like the Frederick’s were in.

Car Shipping Carriers wants to let the public know of the best bang for their buck.  When people think about buying their next vehicle what comes to mind are the local dealerships and searching for a car online.  Local dealerships will have the vehicles in stock and you can drive it home the same day.  When you purchase a vehicle online you will probably have to have it shipped across the country, but the savings could be worth it.  Well, what if there was a way to buy a vehicle the same day, have fixed pricing and no hassles.  That is exactly what people are getting when they make a Costco car purchase.  YES… Costco sells cars and were the #2 seller of vehicles in 2014 by selling approximately 400,000 vehicles.

When buying a car through Costco there are no sales people hassling you to buy a car you don’t really want, no haggling with the pricing and no auto haulers shipping the vehicle.  It is plain, simple and easy.

Why is Costco becoming a HUGE part of the auto industry?  It comes down to the core of Costco.  Costco does not need to make much money on the cars they sell because they make their money from membership fees. Costco makes very little money on the products in the actual store.  They make a profit, but it is not a huge profit.  They make the bulk of their money from membership fees. Costco also has an auto buying service negotiating the best pricing from auto manufacturers.

An example of this is a 2015 Toyota Highlander.  Costco was able to sell it $4,000 under the manufacturers’ suggested price because of the bargaining power it has from the auto buying service and because it can make a small profit on each car and be happy.  Dealerships want to make thousands on each sale whereas Costco may make hundreds.

Costco is becoming a huge threat of dealers and the winners of this are the customers buying the car.  They get great pricing, a stress-free experience and the vehicle that they truly want.  It is a winning combination. 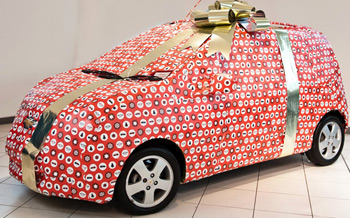 Car Shipping Carriers does everything possible to ensure the customer is well taken care of. In December 2013 a customer emailed in as a returning customer. They needed their son’s car shipped home from California to Illinois. Car Shipping Carriers had previously transported a vehicle for their son when he moved away to college in California 4 years ago as a freshman. They needed it done again, but this time, he was finally coming home. Unfortunately, the return route home was more difficult because of the time frame they needed the car moved and because of Christmas being so close.

What most people don’t realize is that Christmas and New Year’s are so close to each other that this car shipping industry usually comes to a halt for that week. Just as a normal working person takes time off for the holidays, car movers do as well. Usually cars are delivered right before Christmas and nothing much is really done before the New Year.

Our dedicated Car Shipping Carriers staff went above and beyond to contact, interview, and confirm the proper carrier to haul the vehicle home for the holidays for the family. The auto hauler was actually dead on about picking up the vehicle and kept in contact with the customers the entire time. They used our terminal pick up services and left the key for the driver. When the car made it to its final destination, the family was so impressed they called us and praised our services.

Why We Do What We Do

It is stories like these that drive the business of Car Shipping Carriers. Taking the extra few minutes to ask the proper questions and make sure every person involved is on the same page so this process can be as smooth as possible. That is one more satisfied customer for Car Shipping Carriers.